Like the -lyns, Annes, Annas, & Anas are a fairly constant part of American naming. Which specific -ann- name is most common changes with the times, but they generally comprise about 3-5% of girls born in a year. So for a fun look back, I decided to find the most common anne/ane/anna/anas of each generation.
(does not account for alternate spellings, which can greatly change things, especially in recent lists)

*SSA registration was not required until 1937; all data before that point is purely voluntary, and thus may not be as accurate as later data.

Posted by Shanamah at 2:43 PM No comments: Links to this post

The Tribulations of Alexander & Xavier

While browsing the full SSA lists, I've noticed an interesting phenomenon: Alexander and/or Xavier-based smash-names. Smash-names, contractions, portmanteaus--whatever you prefer to call them--have been accepted on girls for a while (Annelise, Marilyn, Rosanna, etc), but have never really caught on for boys. Times, they are a changing--wonder if any of these have a chance?

Posted by Shanamah at 6:43 PM No comments: Links to this post

I really need to come up with a better title for these posts--I'm rapidly running out of "usual" nicknames! Anyway, I see Oz bounced around a bit online, and I do see the appeal: short, snazzy, that zippy Z. The problem is associations--Oz alone is reminiscent of "Land of Oz" (along with a few other pop culture references), and Ozzy...is all Osbourne.
There's Oscar of course, and Oswald, and even Austin if your accent allows, but what else?

Posted by Shanamah at 1:37 PM No comments: Links to this post

It seems conventional wisdom--if you don't want your child to be 1 of 5 in a class, avoid a Top 10 name! Growing up in classrooms of multiple Jennifers, Jessicas, Ashleys, and/or Amandas, our generation is more determined than ever to give our children unique names. But does ranking really mean that much anymore?
There are more names in use than ever before, and more and more people are opting for uncommon names. To compare, about 5% of girls in 1937 were named the #1 name (Mary). In 1974, it was 4.1% (Jennifer). In 2012: 1.6%, including alternate spellings (Sophia).

To see it graphically: 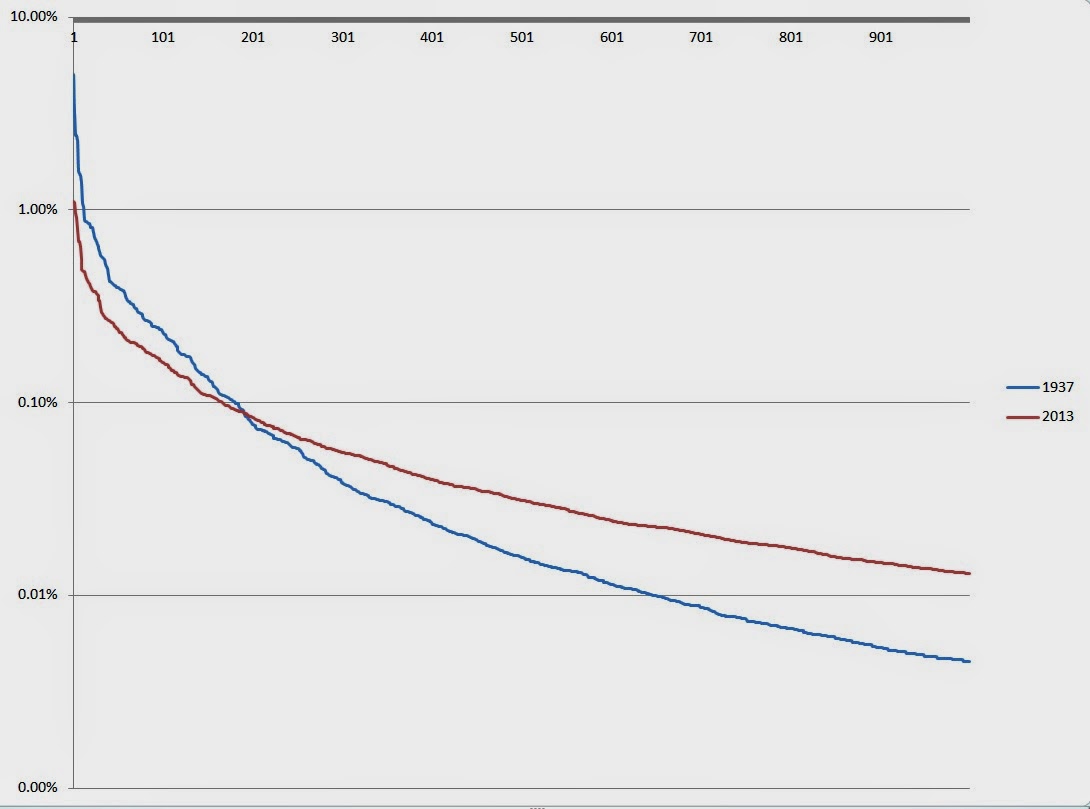 The leveling of the naming pool, so to speak, means you're more likely to run into uncommon names than ever before. The Top 10 names comprised 8.8% of girls born in 2012 (combined-spelling lists); the Top 1000, 81.7%. That means you're over twice as likely to meet a girl with a name below the Top 1000 than you are to meet one with a Top 10 name! Of course, each individual Top 10 name is more likely than each individual below-the-Top-1000 name, but still--wow!
As you can probably guess, the numbers are bit more conservative for boys--9.2% getting a Top 10 name, and 85.8% getting a Top 1000. But still, you're more likely to meet a boy with a rare name than a Top 10 name.

Okay, that's enough nerdy numbers for now. Next post will have more fun names, I promise. ;)
Posted by Shanamah at 12:45 PM No comments: Links to this post

I admit, I'm always looking for ways to make fun namesake posts. I already did female scientists (nowhere near a comprehensive list), and have been looking for some way to do a more guy-centered list about science--difficult, since well, there have been quite a few more male scientists than female, and they've gotten much more attention for their works.
I think I found a fun way, though: here are the people--male, female; fictional or real--who've had elements named for them (albeit occasionally in a round-about way). :)

I admit, I was expecting more historical figures, and fewer mythological ones. Hmmph.
Posted by Shanamah at 11:09 AM No comments: Links to this post

My Particular Version of English